Every cricket fan must have heard the name of Sachin Tendulkar, the greatest cricketer ever in the history of cricket. Sachin Tendulkar, the master blaster of cricket was born on 24 april, 1973 in Mumbai, India. He is considered as God of Cricket.His father name is Ramesh Tendulkar who is a Marathi Novelist and poet and his mother Rajni worked in the Insurance Industry. Tendulkar has three elder siblings: two half-brothers Nitin and Ajit, and a half-sister Savita.
He was Right handed batsman and a part time bowler. He started his test debut and ODI debut against Pakistan in 1989 and played his last ODI match against Bangladesh in 2012 and test against West Indies in 2013.He played his only T20 match against South Africa on 1 december, 2006. In his cricket cricket career he played 200 test matches and 463 ODI matches and scored more than 34 thousands runs which is a record. He is the first batsman to score 200 runs in one inning in ODI. His top score in test cricket is 248 and in ODI his best score is 200. He has also taken 200 international wicket.
We have collected few of his best quotes for you. Hope you like it.
Also Check Out
Virat Kohli Best Motivational Quotes
MS Dhoni Motivational Quotes
1) "Every individual has his own style, his own way of presenting himself on and off the field." 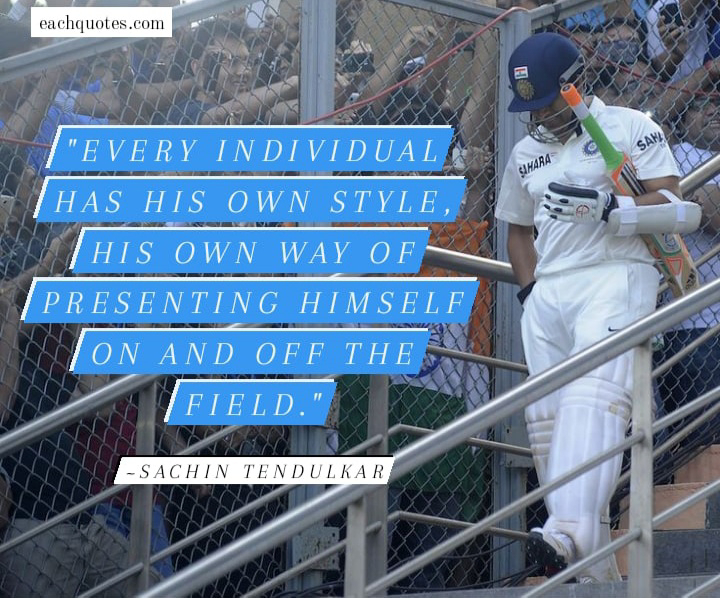 2) "If Destiny throws a stone at you, don’t let it become a millstone. Make it into a milestone."
3) "The key to handling pressure situations like these is to keep yourself steady, follow your instincts and think clearly." 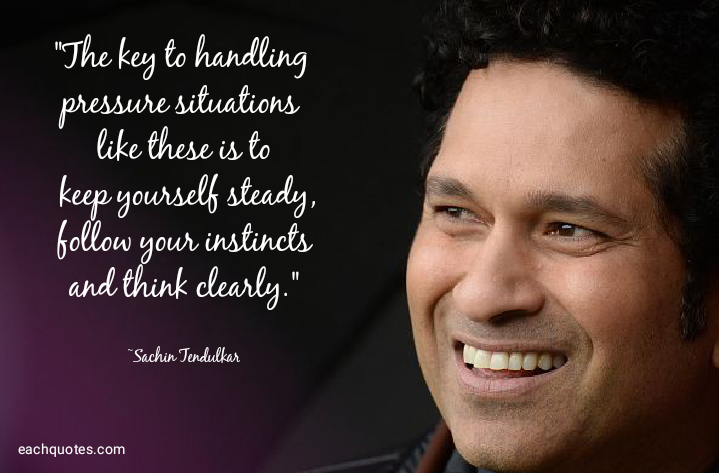 4) "I just want to continue the way I am going."
5)"If you don’t execute your plans, then you don’t reach anywhere." 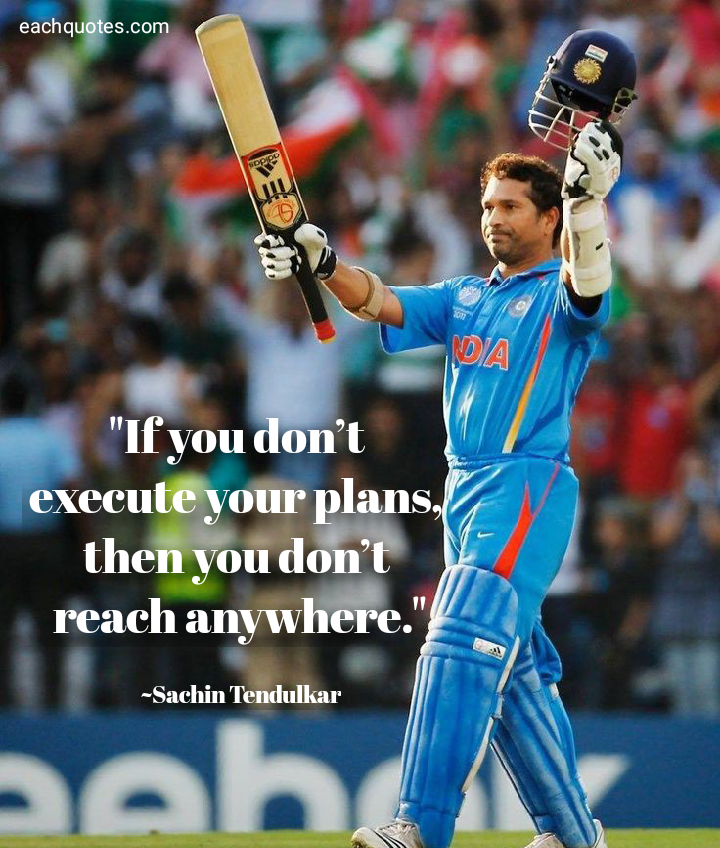 6) "I feel it's the conscious mind that messes things up. The conscious mind is constantly telling you, this might happen or that might happen, even before it has happened. Your conscious mind tells you the next ball might be a out-swinger, but when it's coming at you you realize it's an in-swinger... so literally, you've played two balls."
7) "Don’t stop chasing your dreams, because dreams do come true." 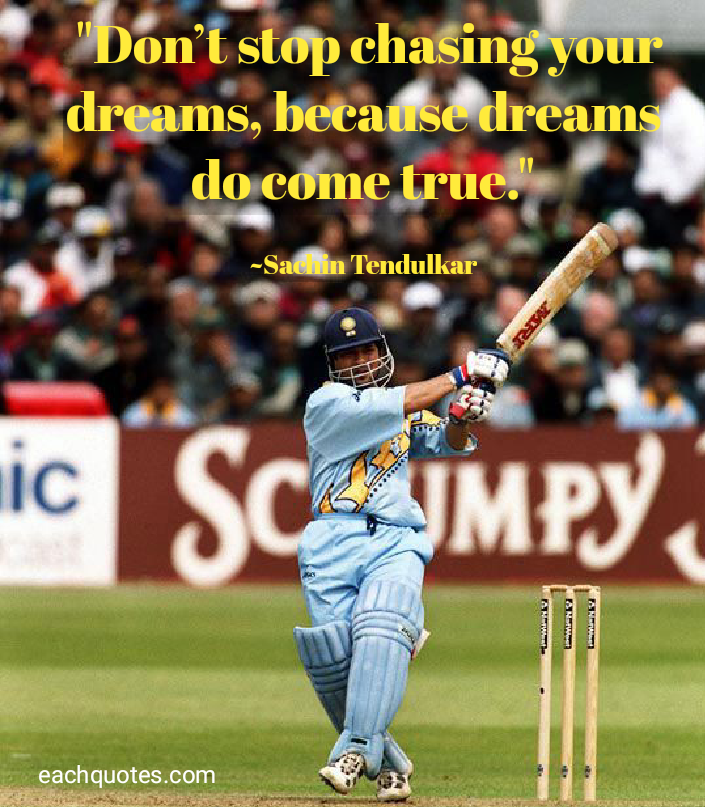 8) "I am not thinking too far ahead, just want to take it one thing at a time."
9) "I just keep it simple. Watch the ball and play it on merit." 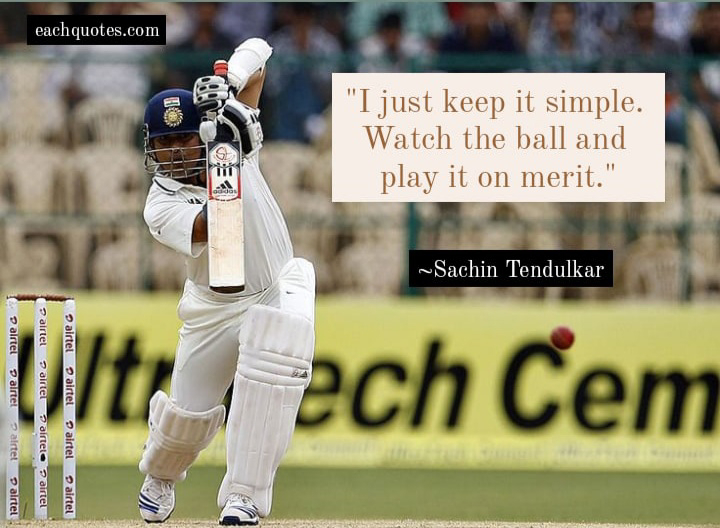 10) "I believe every era has its significance and the same holds true for players and coaches."
11) "I have never tried to compare myself to anyone else." 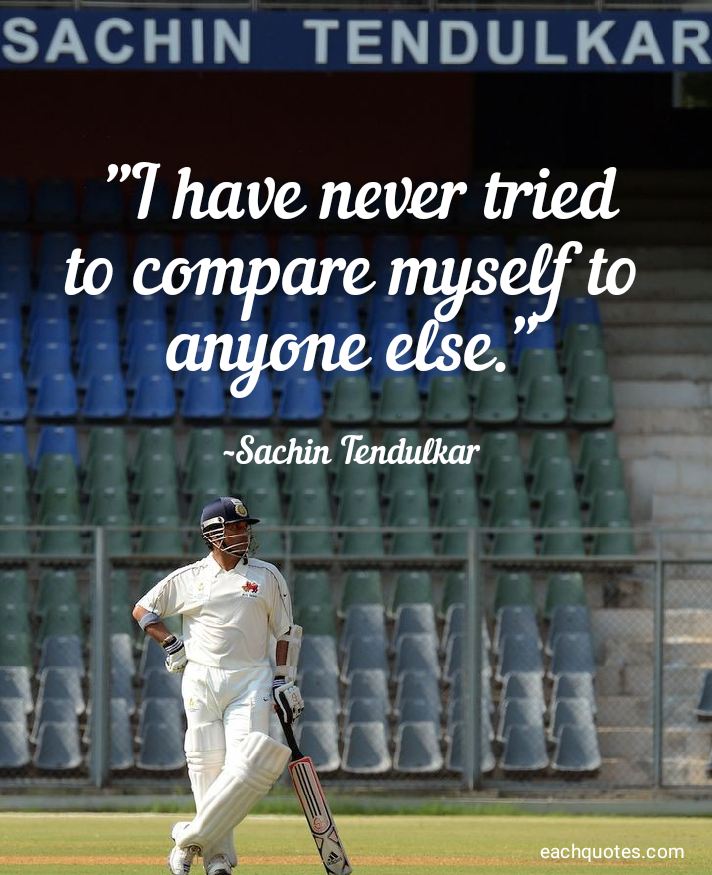 12) "I have played for 15 years and it has been a dream."
13) "If you remain humble, people will give you love and respect even after you have finished with the game." 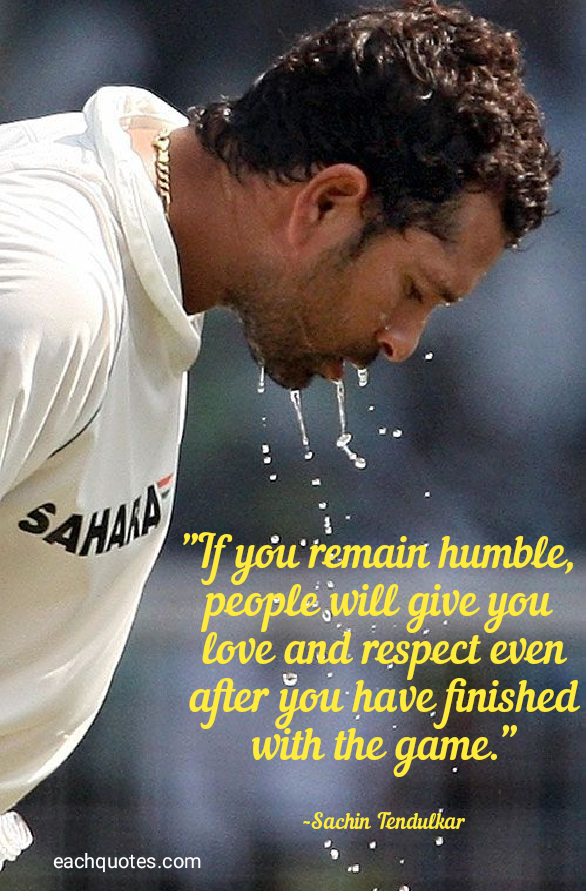 14) "I will always remember the game for other reasons, because I learnt a very important personal lesson. It taught me never to resort to unethical ways and to play the sport with honesty and integrity at all times."
15)"People throw stones at you and you convert them into milestones." 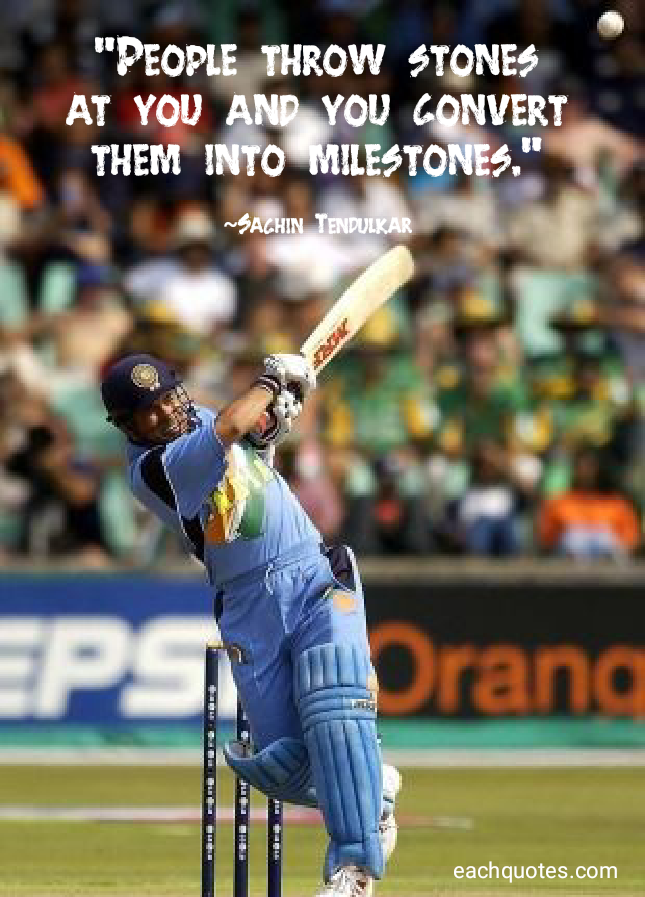 16) "Critics haven’t taught me my cricket, and they don’t know what my body and mind are up to."
17) "A champion team needs only a small window of opportunity to stage a fightback, something I had learnt over the years." 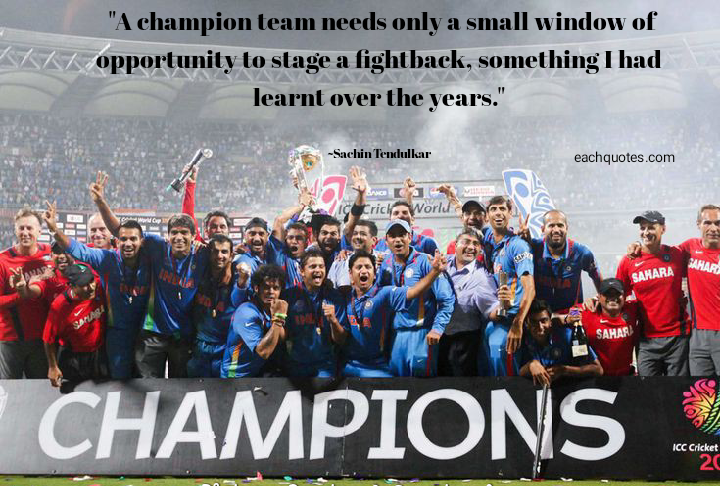 18) "It is easy to hate and it is difficult to love. This is how the whole scheme of things works. All good things are difficult to achieve; and bad things are very easy to get."
19) "I hate losing and cricket being my first love, once I enter the ground it's a different zone altogether and that hunger for winning is always there." 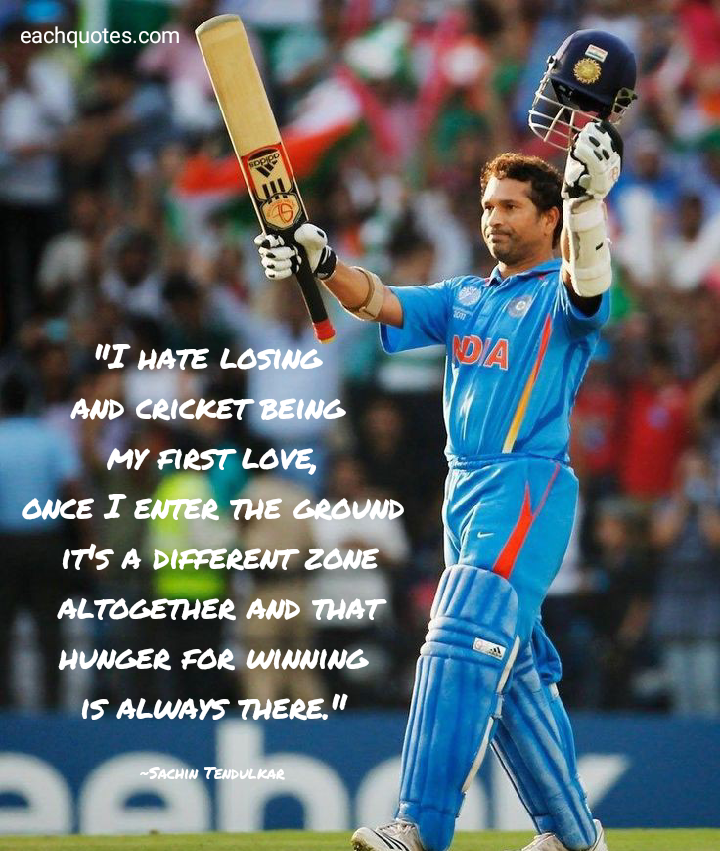 20) "Everyone at home was very supportive, but my father always said that all he wanted me to do was give it my best effort without worrying about the results."
21) "I have never thought where I will go, or forced any targets on myself." 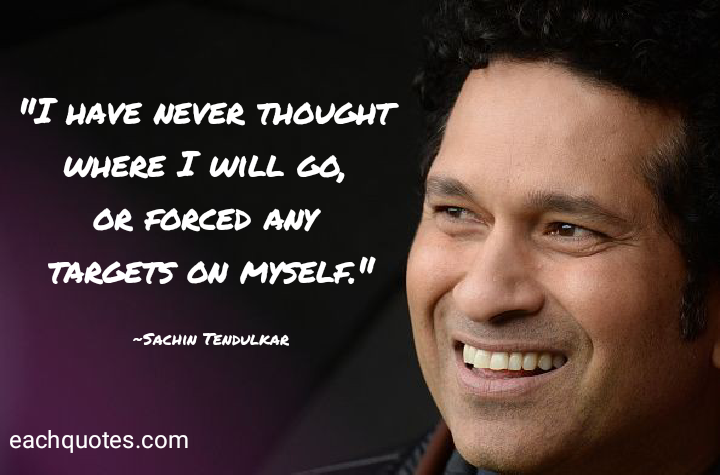