One of the seven wonders in the world, Taj mahal is situated on the right bank of Yamuna river in Agra, Uttar Pradesh, India.It was buit under the reign of Mughal emperor Shah Jahan in the memory of his wife Mumtaj Mahal. It took 21 years to build completely. The Taj Mahal was designated as a Unesco Worl Heritage Site  in 1983 for being "the jewel of Muslim art in India and one of the universally admired masterpieces of the world's heritage". It is regarded by many as the best example of Mughal architecture and a symbol of India's rich history.
Here are few best quotes on Taj mahal. Hope you like and share it.

1)“Not a piece of architecture, as other buildings are, but the proud passions of an emperor’s love wrought in living stones.” ~Sir Edwin Arnold 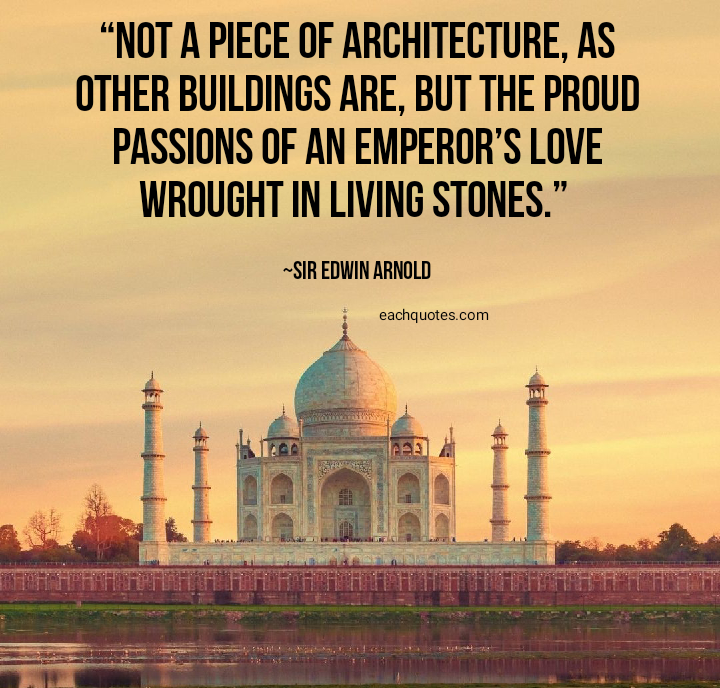 2) “It appears like a perfect pearl on an azure ground. The effect is such I have never experienced from any work of art.”
~Hodges

3) "If I had never done anything else in India, I would have written my name here, and the letters would have been a living joy." ~Lord Curzon 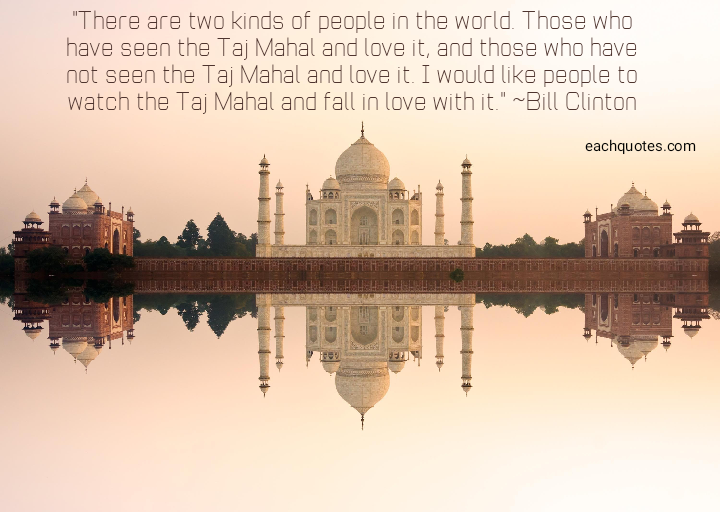 5) “You know Shah Jahan, life and youth, wealth and glory, they all drift away in the current of time. You strove therefore, to perpetuate only the sorrow of your heart? Let the splendor of diamond, pearl and ruby vanish? Only let this one teardrop, this Taj Mahal, glisten spotlessly bright on the cheek of time, forever and ever.” ~Rabindranath Tagore

6) “A massive marble structure, without weight, as if formed of ether, perfectly rational and at the same time entirely decorative, it is perhaps the greatest art work which the forming spirit of mankind has ever brought forth.” ~Kount Hermann Keyserling

7)"The world believes it was built by love but reading Shah Jahan’s own words on the Taj, one could say it was grief that built the Taj Mahal and it was sorrow that saw it through sixteen years till completion."  ~Aysha Taryam

8) I’ve just been to the Taj Mahal which I’d never been to and I’m not a very romantic kind of guy but it is the most romantic thing I’ve ever seen. -Danny Boyle 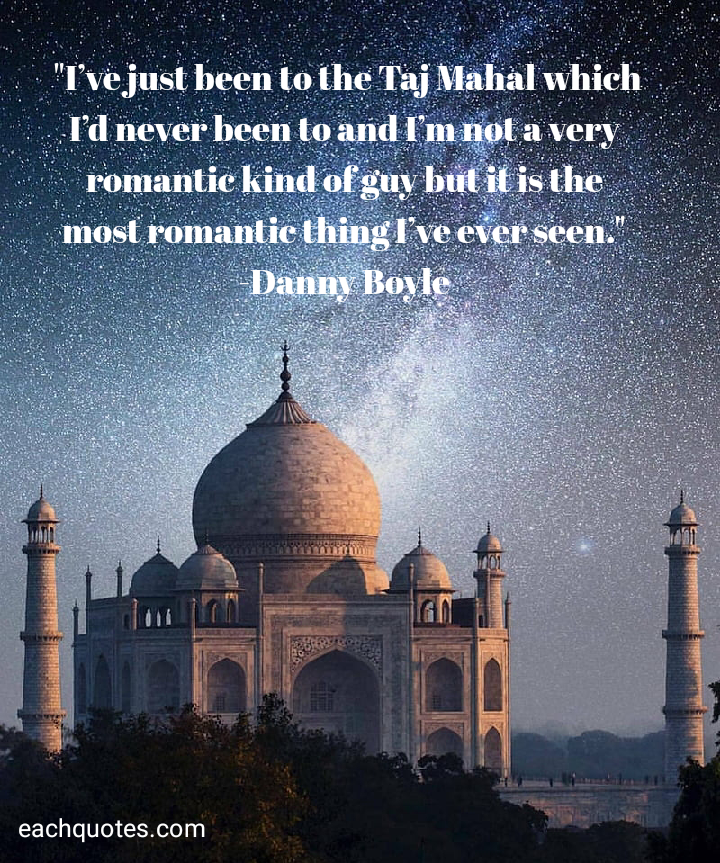 9) "Taj Mahal was built as a team; without a team, it was a far dream."  ~Vinita Kinra
10) “Did you ever build a castle in the Air? Here is one, brought down to earth and fixed for the wonder of ages.” ~Bayard Taylor

11) "I was impressed by the Taj Mahal. A good bit of work, well looked after, worth paying money to see."  ~Karl Pilkington

12) "I found the Taj Mahal as the most appropriate example of artistically expressed love." ~Suman Pokhrel 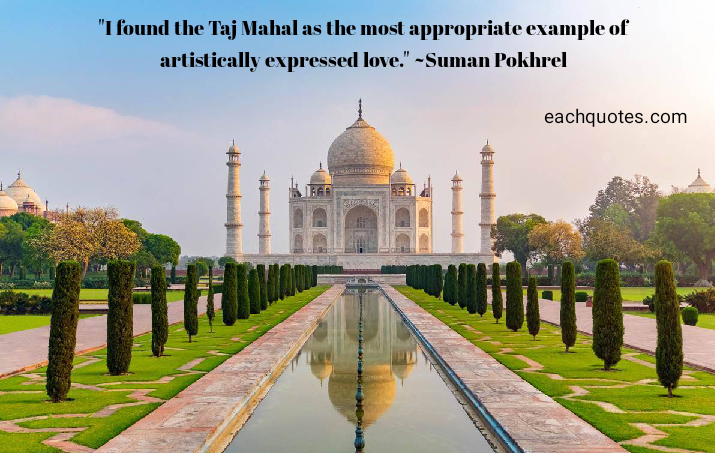 13) "Taj Mahal is not just a monument, but a symbol of love." ~Suman Pokhrel

14) "You can slow time down by traveling. That month from Shringar to the Taj Mahal is like a year in my life currently. Really, time is a measure of change, in a vacuum time doesn’t exist because nothing’s changing. If you can pack your life full of interesting changes you stretch it out. So if you want to live longer, have a really interesting life."   ~Christopher Ryan

15) "The Taj Mahal rises above the banks of the river like a solitary tear suspended on the cheek of time."  ~Rabindranath Tagore

16) Now remember, they say if two people go together to visit the Taj Mahal, that means they will always be together. Are you ready for that? Guess I’m stuck with you then. -Anonymous 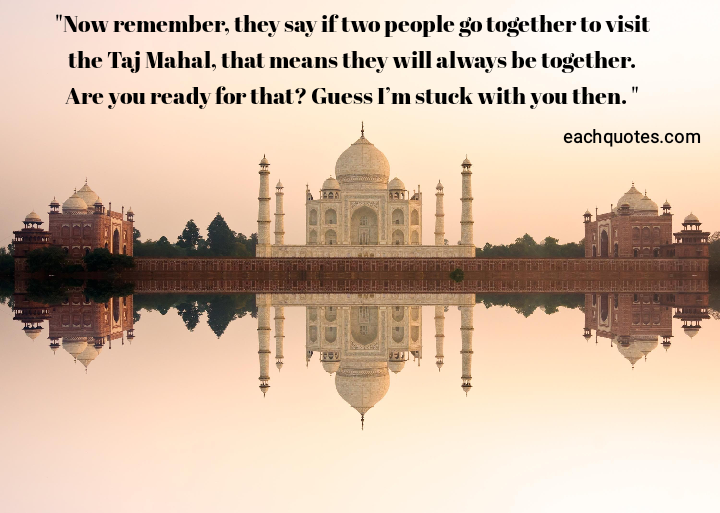 17) The Taj Mahal would not have been so beautiful if Shah Jahan had asked for three quotations and decided for the lowest.

18) Why is Taj Mahal an ideal for lovers? Because they believe in sang marmar.

19) "Rahul had wondered how someone could love their beloved so much that their dedication to them became one of the wonders of the world."  ~Faraaz Kazi

20) The Taj is pinkish in the morning, milky white in the evening and golden when the moon shines. -Anonymous 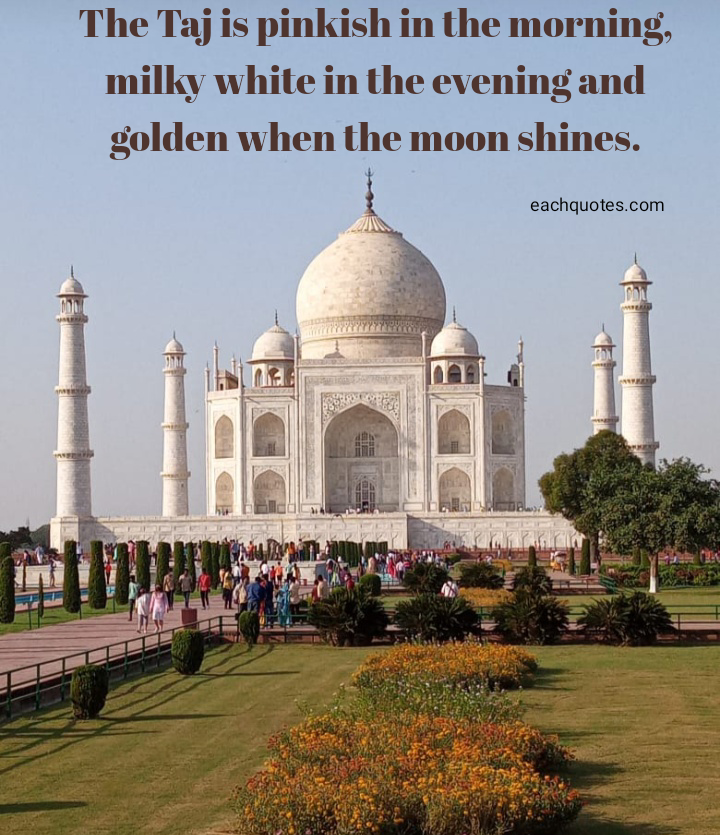